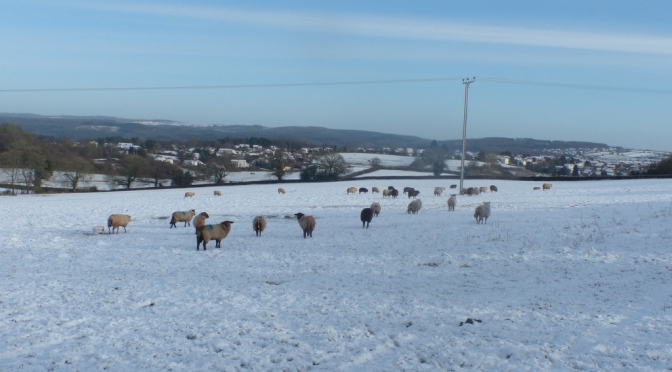 That is what it said on the BBC’s weather page this morning, “The MET office have issued a Yellow Snow Warning for Gloucestershire.”

We had a little bit of English snow last night, it nearly hid the grass and by eight o’clock this morning it was drip, drip, dripping, everywhere. It was still enough to put the Sheep into a tizzy and you can guess what we were up to this morning. 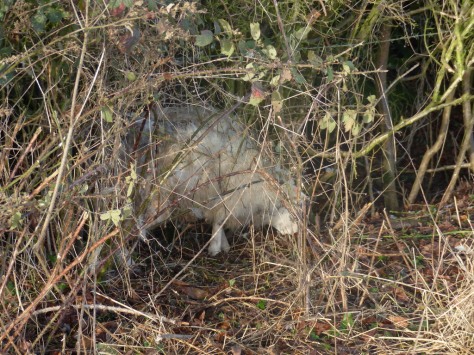 This stupid animal just kept going deeper and deeper into the bramble as I tried to cut a way to her. 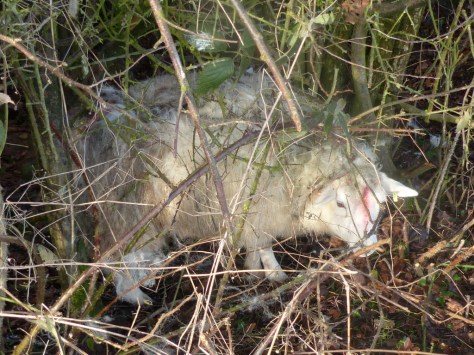 I ended up pulling her gently out by a bramble as I just couldn’t get near to her. 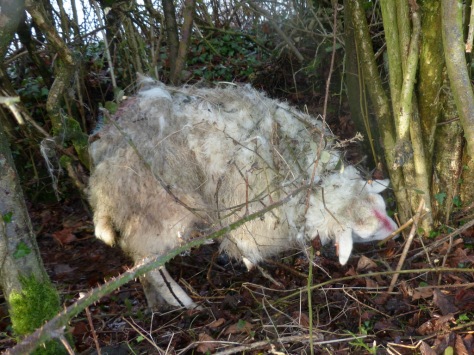 It looks cruel but then I am cruel and I would not shy from starting a snowball fight with a little defenceless puppy either. 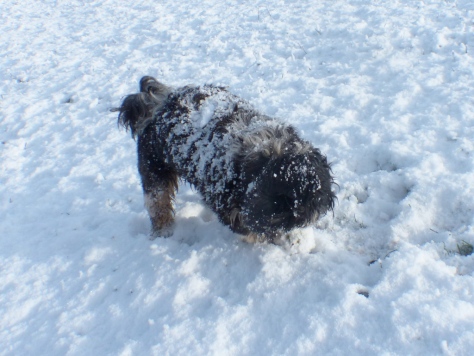 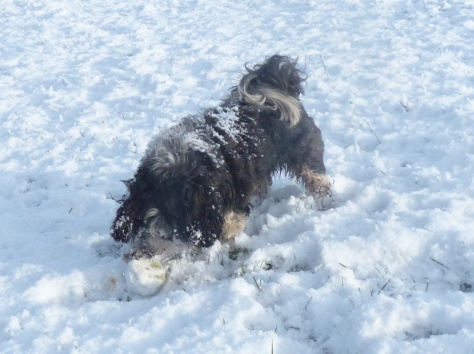 Unfortunately Fizz didn’t understand the first rule of fight club: You can’t throw snowballs back, you might hit the camera.

Most of the pictures that I took today turned out to be ruined due to me having a snowy and wet camera. 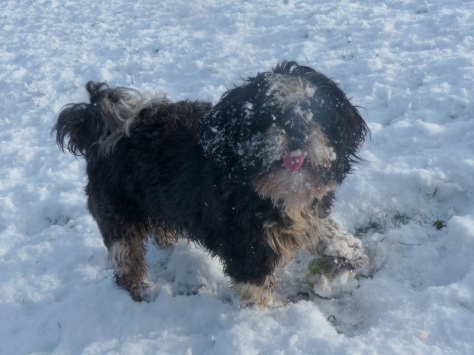 Then we found another Sheep in distress.

This one was so badly tangled it was walking on three legs. 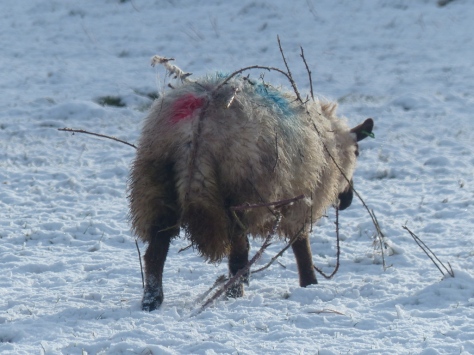 That was all that we needed, the Sheep have to be brought in. So they have been, they are all cleaned up and tucked away in the orchard.

They will stay there now until the end of next week because the farmer is going on holiday and I don’t want the Sheep out while he is away. Next week I am in charge.

Yes. I am in charge of you too.

I put the trail camera out last night.

I had to alter my plans slightly, I don’t want to draw attention to the animals on public land and I didn’t know how much snow we were going to get.

No matter how well I conceal my bait, if it snows the animals will leave an obviously turned over area and tracks all around.

So I decided just to put the camera out on the farm and see if I could catch anything there.

This first video is of a Fox who is disturbed by a U.F.O.

Foxes and Aliens are predictable fodder for a Gloucestershire farm, on a winter’s night.

I didn’t expect this next one. One o’clock in the morning when they should be tucked up in their little woolly blankets, fast asleep. What on earth are these sheep doing?

As far as I can tell a group of them are creating a diversion whilst one of them removes the batteries from my camera and changes the SD card.

What do they want with batteries and what was on that SD card that they didn’t want me to see?

Well that is enough blarney for today.

Some friends of mine have been having dreams and sometimes these dreams have been coming true, not always in a good way.

Now this is the honest truth, last night I dreamt that I was writing about Geum urbanum, in my dream I carefully chose the pictures that I would use (One of them I remember was of a silver Ford Transit van) and I chose the words.

I woke up and I wrote this. It is not quite the same as in my dream (No vans) 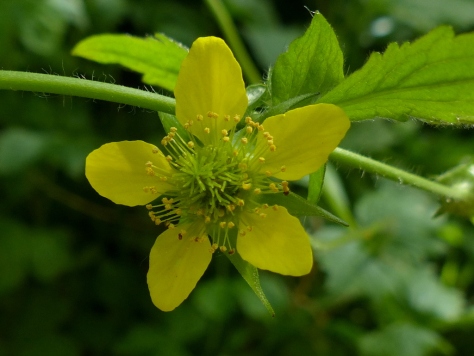 Geum urbanum, Wood Avens is also widely known as Herb Bennet. A member of the Rose family the genus Geum is commonly known as Avens, it is very closely related to the Potentilla (Barren Strawberries) and the Fragaria (Strawberries) a relationship reflected in the shape of the flower.

The species name urbanum just means urban (of the town or city). It is a species closely  associated with man as it grows well on disturbed ground but also the burrs that carry the seeds tend to stick to men and their livestock and so follow them around. 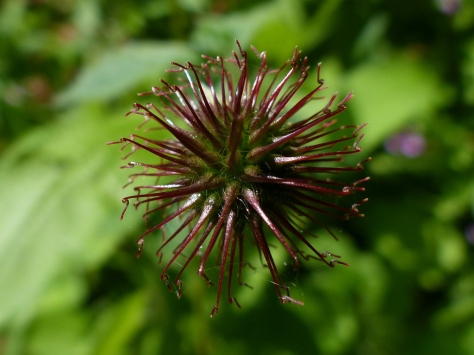 Locally Wood Avens is a plant of woodland edge and hedgerow.

I am going to look at how the small strawberry like flower develops into the hooked burr that is the seed head but first we should have a quick look at the calyx.

The calyx is made up of five sepals. Between each of the large sepals is a small bract called an episepal and they form an additional structure called the epicalyx. The sepals that form the calyx are there to enclose and protect the flower as it develops. The epicalyx just seems to add extra protection. 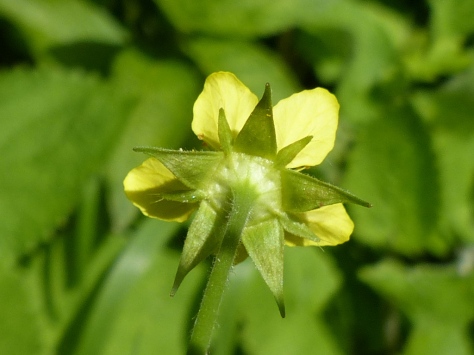 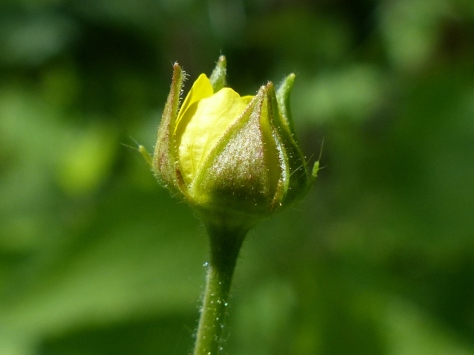 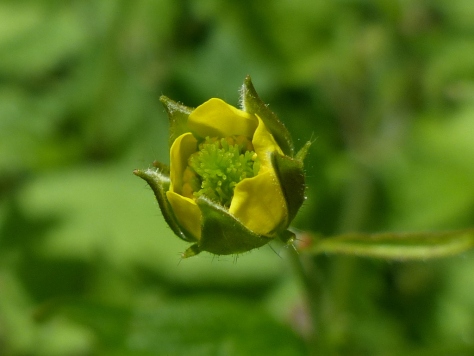 The flower has five yellow petals, they are widely spaced like those of the Barren Strawberry. A ring of yellow stamens enclose the green, multiple styles that will become the burr. 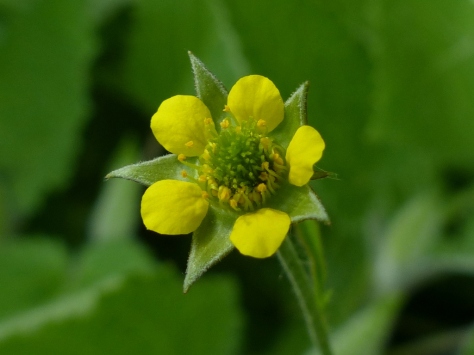 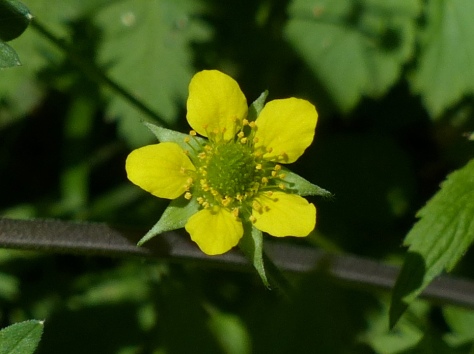 As the flower matures the styles turn from green to brown. 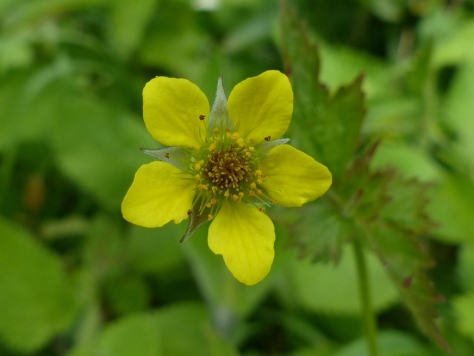 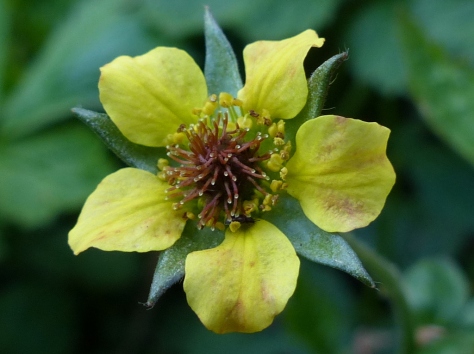 The petals drop off, Seeds are developing at the base of the styles and the styles are becoming kinked and hooked at the tips. 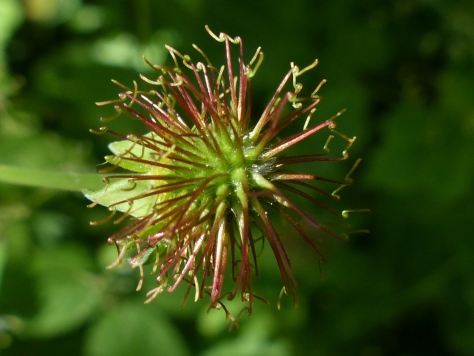 All that remains of the flower is the burr which will attach itself to a passing animal and so disperse. 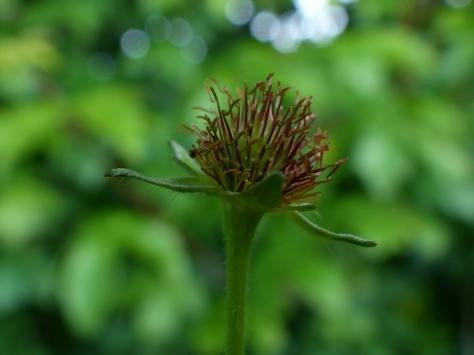 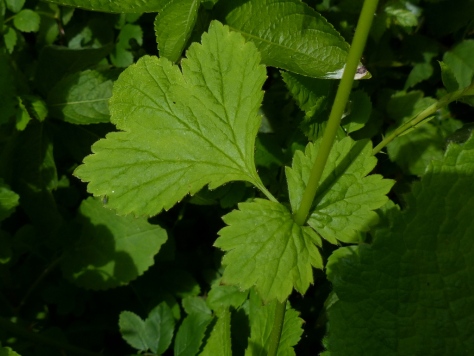 As you move up the plant the trefoil aspect of the main leaf becomes more obvious. 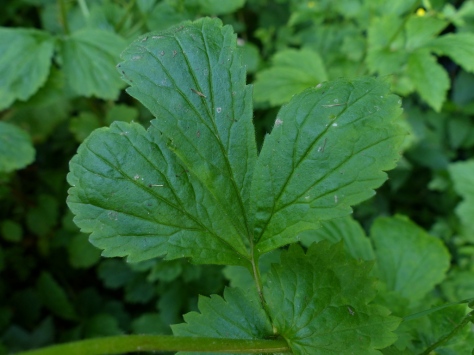 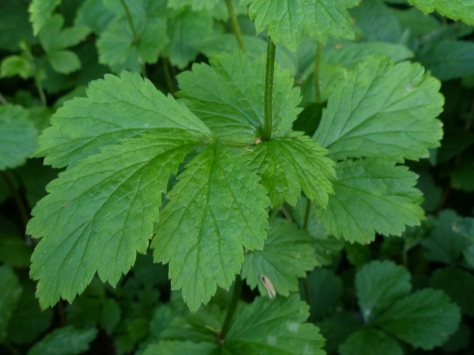 At the top of the plant the trefoil nature of the main leaf seems to be abandoned and we are left with a single, toothed, lance shaped leaf with the two smaller leaves still at the base of the stem. 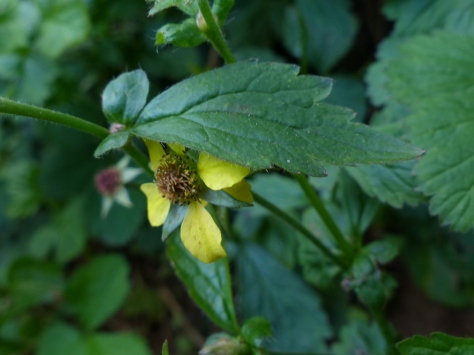 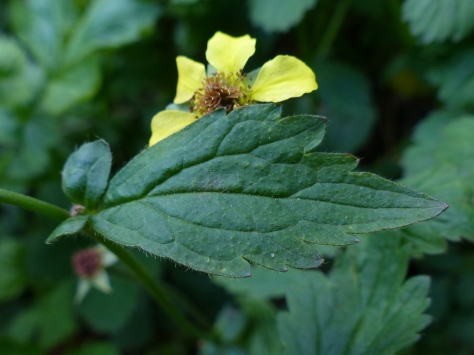 The name Herb Bennet comes from an older name Herba benedicta which simply means Blessed Herb. The root of the plant was once worn as an amulet to protect from evil. It was believed that if you kept the root in your house then Satan could not enter and that a man wearing such an amulet was immune to the poison of beasts. 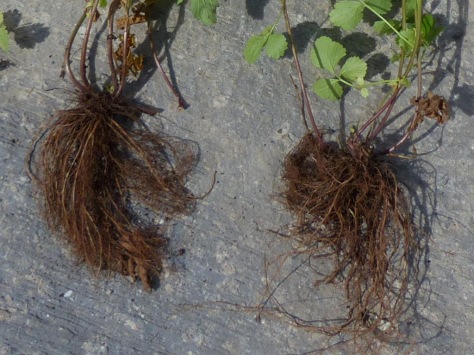 The roots were also widely used in medicine, dried and powdered they were used to prevent stomach ills and to cure poisoning and when boiled with wine a cordial was made to protect against plague. 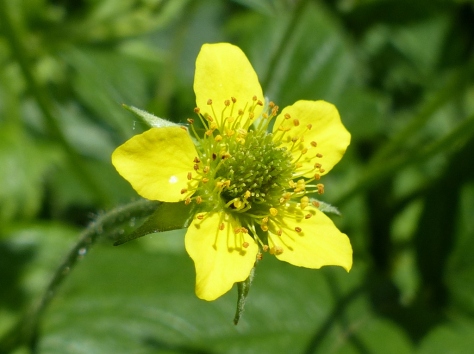 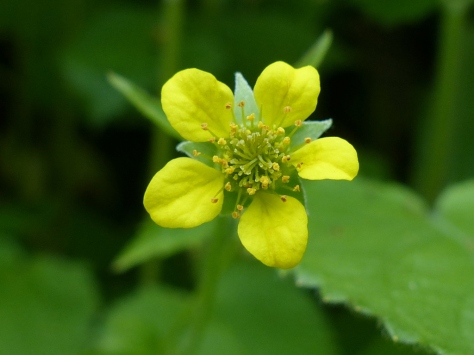 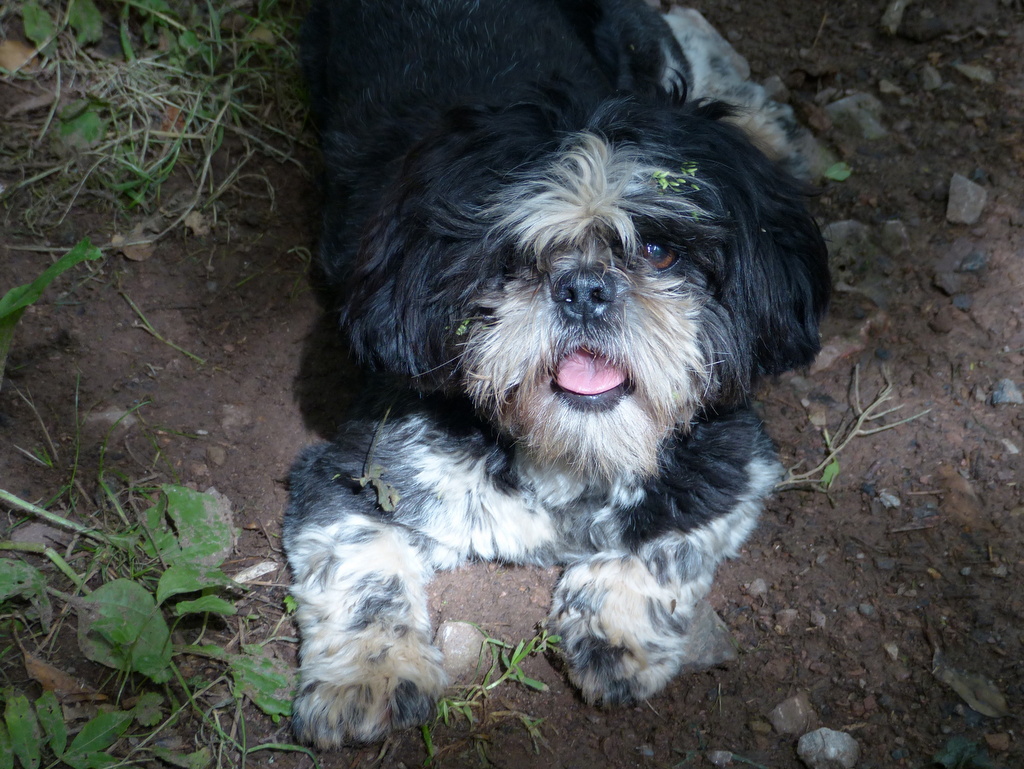 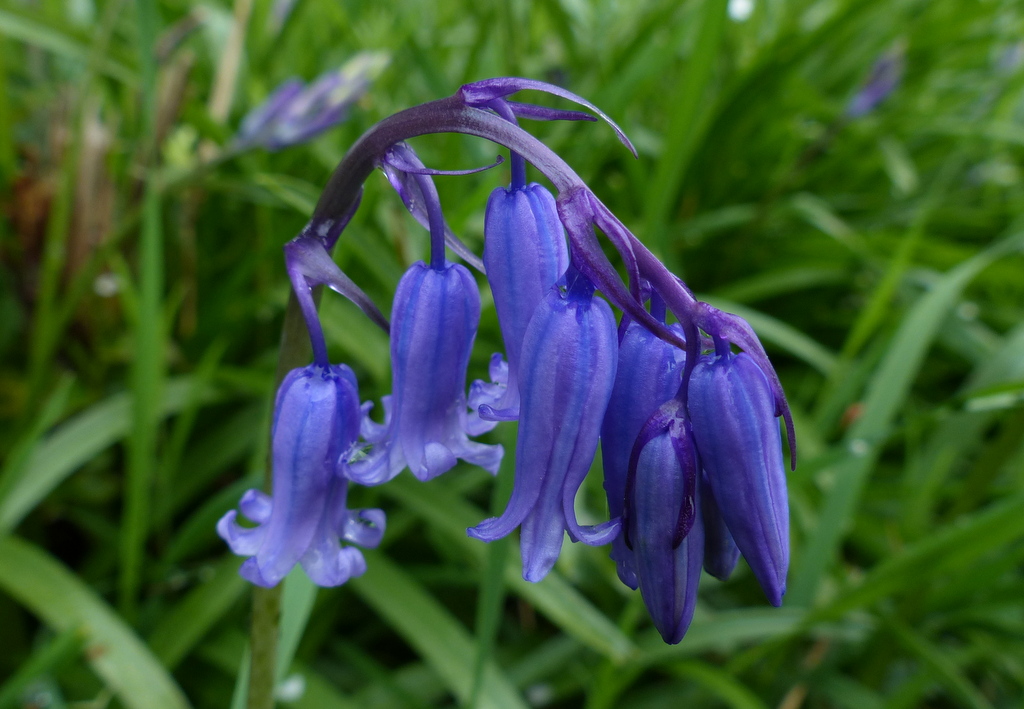